A couple of weeks ago I went to the Haskell eXchange in London. I learned a lot and had a great deal of fun while I was there, and went away with my head spinning.

On the weekend after the conference, they had a hack session on Haskell infrastructure. I wasn’t able to attend, but here’s what I would have pushed for if I’d been there: vastly improved documentation tools.

I’m very grateful for what’s already been done by those who’ve worked on haddock, cabal, hackage and so forth, and I don’t want to disrespect the time & energy they’ve put in. However, things could be a lot better.

I want to start by showing how Rust do their docs, to provide a point for comparison. Then I’m going to finish by making a few concrete recommendations.

How Rust does it

I know it’s not quite a fair comparison, because Haskell doesn’t have a standard library per se. Bear with me for now; I’d rather focus on documentation rather than distribution. 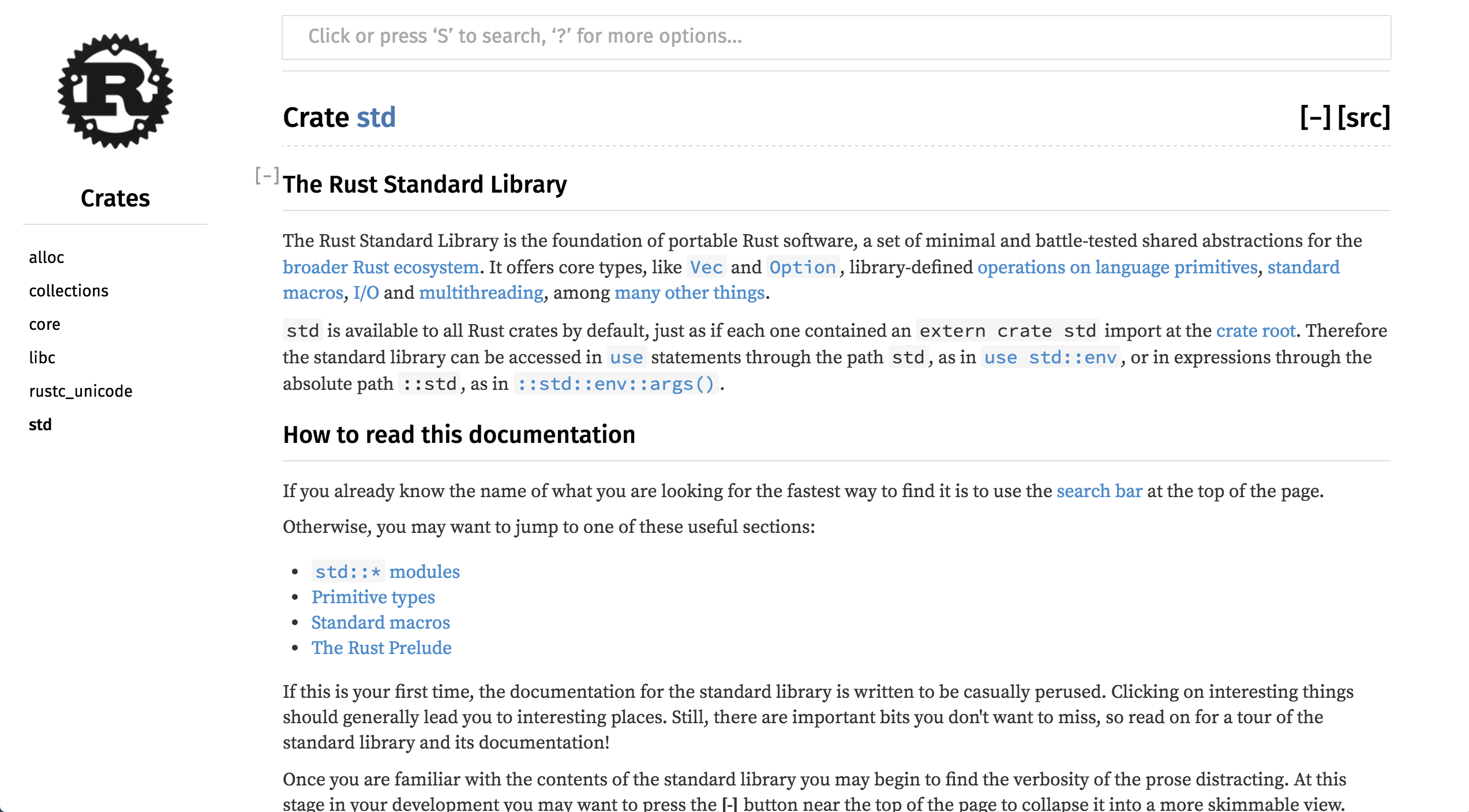 Notice that it’s better looking than the equivalent Haskell documentation page. The Haskell Platform documentation page and Stackage package list look all right, I’ll admit. But as we’ll see below, whatever good impression they make is sabotaged when you follow a link through to actual Haddock-generated documentation.

Note further that it’s immediately searchable. There’s a nice big search bar at the top that you can use. It even includes inline help for how to use the keyboard to start searching.

Stackage has search, which is great, but it considers it less important than instructions on editing stack.yaml. It feels as if it counts itself as a distribution page that happens to provide links to documentation, rather than a documentation page.

If you search for Option (Rust’s equivalent to Maybe), you get this: 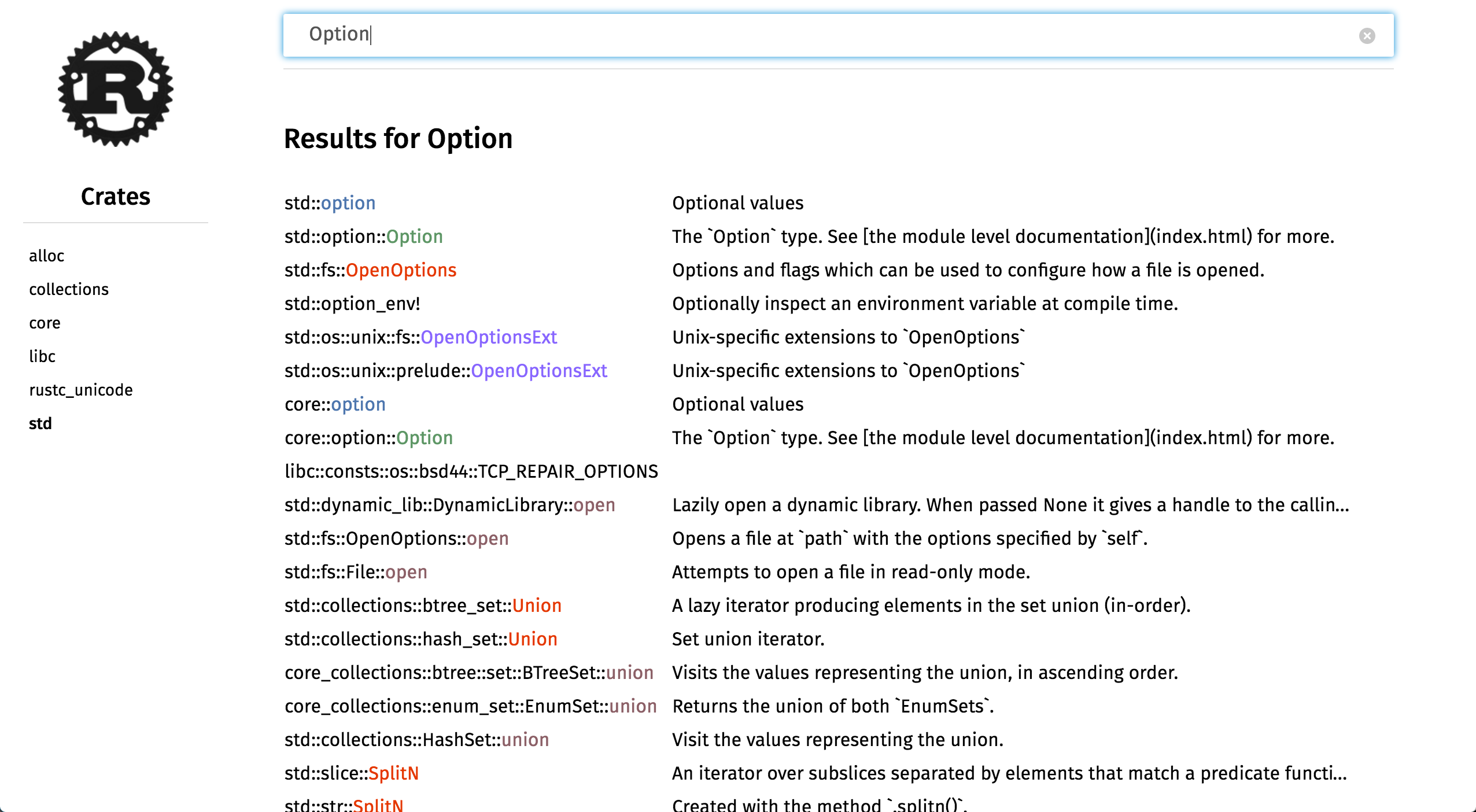 Here, there’s not much different from Stackage’s search results for Maybe.

Both find the right thing, both have useful descriptions in the results. Rust’s is faster. Stackage’s uses Hoogle, which is more powerful.

Points deducted for using the word “Hoogle”, which is an uninformative inside joke.

Search is super important for documentation. The whole reason for going to the docs in the first place is that you don’t quite know what you’re doing. A good, readily accessible search function makes this ignorance much more manageable.

If we go to the first link for Option in Rust’s docs, we see this: 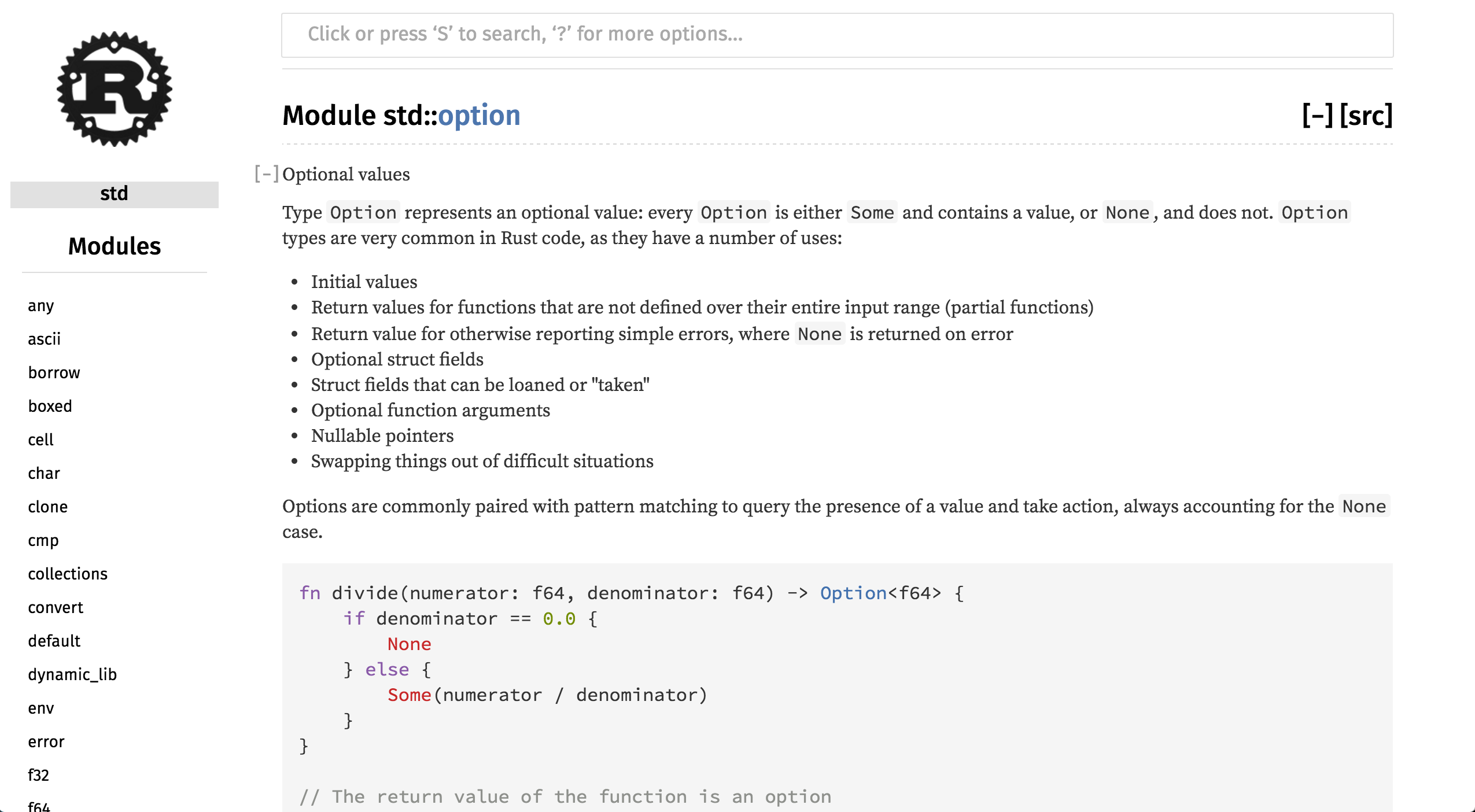 Contrast this with the first link from Stackage.

The documentation for std::option looks the same as the landing page. You haven’t been whisked away to a mysterious other site, you’re still browsing the docs.

Further, Rust’s documentation is still immediately searchable. That search box is right there, all the time.

Even more, there’s example code right there on the front page. There’s no example code at all in the Maybe docs in Prelude, and also none in the Data.Maybe documentation.

Haddock’s markup is … idiosyncratic. That’s a problem for people who are already switching between a half-dozen other markup syntaxes, but, I’m willing to give it a pass. Pretty much every markup is terrible.

However, Rust’s built-in tools have a killer feature that I think helps to explain why they have so many examples in so much of their documentation.

If you run cargo test (analogous to cabal test) on a normal Rust package, it will compile any example code it can find and then run it. If it doesn’t compile, the tests fail. If it has assertions that don’t hold, the tests fail.

The assertions you see in the documentation for, say, Option.unwrap_or (equivalent to fromMaybe) are actually executed whenever you run the tests during development. This prevents examples from becoming out of date.

Also, when you build the docs locally, you get something that looks almost exactly like the standard documentation. I picked a package at random from crates.io and found feedreader.

If you follow the link, you’ll see that it’s searchable too. You’d get that same searchability if you were working on feedreader locally & offline.

What Haskell can do

Looks matter. There are studies (citation needed) that show that aesthetics have a significant impact on usability.

I guess that most of the Haskell community are more comfortable with types than typography (self included), but there has to be someone out there. If not, we could have a whip-round and hire someone to make a better design.

The reason you look at docs is because you don’t know what you’re doing. We all can questions that we needed answered, but we couldn’t, because we didn’t know how to phrase them. Search goes a long way to ameliorating this problem. A fast search is even better, because you can try a few different things.

Nothing beats an example. We already have awesome type signatures. If we add examples, we complement the abstract with the concrete. Most learning involves bouncing from one to the other and back again. When we don’t provide examples, we are denying ourselves one of the best learning tools available.

Imagine a world where, even when you’re hacking in a cabal sandbox, you can browse the docs for all of packages that you have installed in that sandbox. (ghc-pkg already shows this information. There’s just no browseable index page.)

Imagine if you could search them—even when you’re offline—without having to figure out how to generate a Hoogle database. Hoogle is so amazingly useful I am boggled that don’t have it right at the forefront of the developer experience.

Imagine if when you ran cabal docs, your docs were built and a browser window opened, so you could proof-read and explore and search them.

Imagine if when you viewed your own docs locally, they looked shiny and pretty and something that you could be proud of.

We have all of the pieces to make this happen. We just need some brave volunteers to glue them all together.

That’s it. It’s a bit of a rant, but that’s because I feel strongly that this is an area where only a little work could make Haskell much more attractive.

I wish I could promise that I was going to make this my mission, but I can’t.

I’ve made my own small contribution to the cause with open-haddock, a tool that opens the local documentation for a package or module. However, I see this as a stop-gap measure until someone builds the right tools

Beyond that, if this has inspired you to improve the Haskell documentation toolchain, then let me know. I can’t help much, but I’ll chip in as best I can.